Special to The Columbus Times
Nashville, TN--Mr. James “Monk” Johnson, along with three other Tennessee State University (TSU) Alums, will be honored at their “Breakfast of Champions” during the homecoming celebration at Kean Hall on the campus of TSU at 8 a.m., Friday, October 29, 2021.  He was selected to be one of the distinguished honorees for his extraordinary athleticism, philanthropic and humanitarian contributions as an alumnus of TSU.  He will be honored with the Legacy Award.  This prestigious award recognizes individuals, who, through their efforts as a student or employee, helped to create, foster and preserve the legacy of TSU athletics.
He was instrumental in sending over twenty-five student athletics from his home town of Columbus, GA and some of them went on to play in the National Football League.  While living in Nashville, The Nashville Tennessean newspaper awarded him the Tiger Award, calling him the “Pied Piper of Columbus.” Monk said, “It is good to be recognized for something you love doing and I will be honored to receive the Breakfast of Champions Legacy Award and excited to return back to Nashville for homecoming!”  Photo by Edward Lamboy. 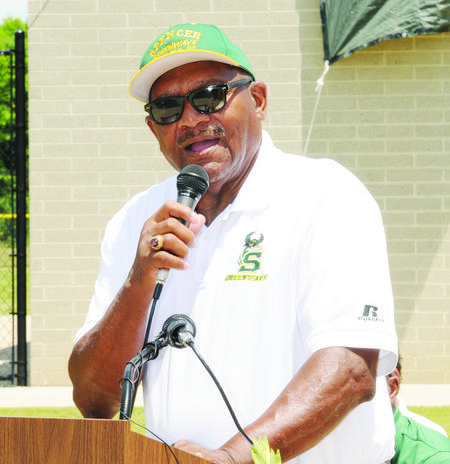