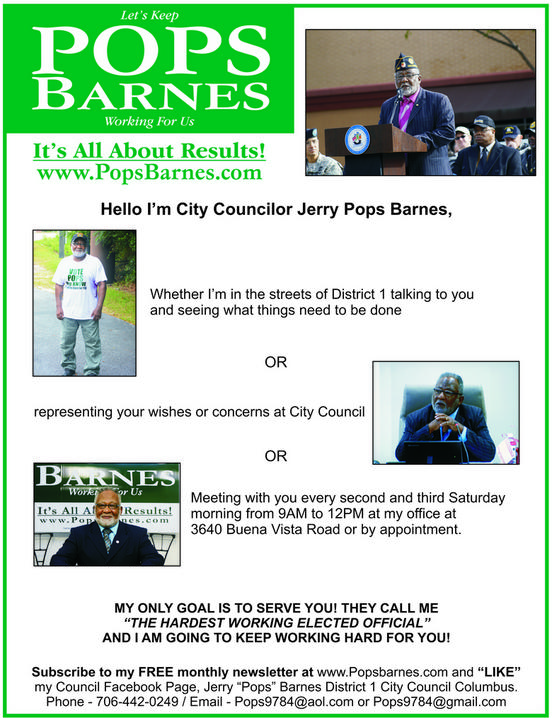 By Carol Carter, Special to the Columbus Times
Columbus, GA –His picture was on the printed program. There was his name in gold balloons on the sports complex fence. A bus load of Tennessee State University support group that included some retired and former NFL football players representing the Atlanta Falcons, Chicago Bears, Cleveland Browns, Miami Dolphins, New England Patriots, Seattle Seahawks, Green Bay Packers, Philadelphia Eagles, and the Buffalo Bills, were in town on a luxurious chartered bus from Nashville, Tennessee as well as hometown former Oakland Raider, Otis Sistrunk and Thermus Butler from the Canadian Football League. And the friendly elderly lady, Ms. “Bay” King, 108 years old, was there because she knew Monk from a child and she is the one who gave him his nickname.
Do you know Monk? After reading this article, you will get to know a very special man.
Even before the formal ceremony of the William Henry Spencer High School Sports Complex Naming Ceremony Honoring James “Monk” Johnson began at 1 p.m. on Saturday, May 15, 2021, a bus load of retired NFL (National Football League) professional athletes was already in William H. Spencer High School greeted by their fellow athlete, Monk and Ms. Rosa Patterson, assistant principal. The Columbus Times newspaper had retired staff, former staff and four photographers on hand including retired publisher Mrs. Carol Gertjegerdes; also capturing the historic moment with 35 ml cameras were Edward Lamboy, Henry Thomas, A. J. Myricks and Jordan Myricks. In the audience was former circulation director for the Times, Mr. Eugene Washington and Mrs. Vivian Barclay, former office manager.
There was an outstanding front-page article on the First week of May, 2021 edition of The Columbus Times Newspaper with a handsome photograph of Monk.
As family and friends began to gather for the outdoor program, guests were being seated, given a program with a picture of Monk, the ceremony sequence and school alma mater, offered an ice-cold bottle of water and a gold, seat cushion as a memento of the historic occasion. Arrival music played as former students, past faculty, grateful family and friends made sure to attend this once-in-a lifetime festivity.
The Mistress of ceremony was Ms. Rosa Patterson, assistant principal, W. H. Spencer High School. After her opening and the arrival music, a Musical Selection was played by Rev. Roderick Baptiste, pastor, Mt. Olive Missionary Baptist Church, Seale, AL. The Posting of Colors was performed by the William Henry Spencer JROTC. Next came the adorable twin brother and sister grandchildren of Monk from Nashville, TN, Kyree and Kimayah Johnson, who said the Pledge of Allegiance by heart. They were escorted to the podium by Mrs. Gwendolyn Johnson, the beautiful wife of Monk and their grandma “G”. The Invocation was brought by Rev. Dr. Johnny H. Flakes, pastor, Fourth Street Missionary Baptist Church, Columbus, GA. Dr. Johnny Freeman, principal-W.H. Spencer High School, gave a warm Welcome. He said he has known Monk for 9 years. He praised Monk for what he has done for the students and staff.
Remarks were delivered by several individuals. Dr. David Lewis, superintendent, Muscogee County School District (Columbus, GA), was the first individual. He said, “God blessed us with a beautiful day.” He continued and said he has the highest esteem for Monk and concluded his remarks with, “Monk, you are a role model.” Muscogee County School Board chair Pat Hugley Green warmly said, “Monk, we truly appreciate you.” She acknowledged other officials including Columbus Police Chief Blackmon, Columbus Police Assistant Chief Joyce Dent-Fitzpatrick, Columbus Councilman Bruce Huff, Muscogee County Sheriff Greg Countryman, Muscogee County Tax Commissioner Lula Huff, Muscogee County School Board members including Ms. Laura McCray, Ms. Vanessa Jackson and Mrs. Cathy Williams. Also mentioned were Ms. Mae Washington former teacher and counselor at 94 years of age and seen in the audience was 95.3 radio personality Rasheeda Ali.
Following Mrs. Hugley was Muscogee County School Board member Vanessa Jackson who said that Monk gets the job done and added “keep making the impossible possible”. She was followed by Muscogee County School Board member Cathy Williams. She remarked that Monk has always been there to help and “all students deserve the best.”
Next came the impressive Tributes. The series of Tributes led off with Mr. David Coleman, former Tennessee State University football player. He told about the records set by Monk, at Tennessee State. He described Monk as a father, husband, brother, mentor and friend to a stranger. He spoke about Monk going on to Sunbeam Bread Company where he stressed that Monk was teaching life lessons –a man with dignity and values. He quickly added that “James Monk Johnson was a positive impact.” Then three (3) Proclamations were read about Monk, including two from Tennessee State University; the Atlanta Football Chapter and the National Alumni Association, the third proclamation was from GA State Representatives Calvin Smyre and Carolyn Hugley
Mr. Robert Sanders Spencer Athletic Director, is the son of the late Mr. Pete Sanders, who was on staff at George Washington Carver High School in Columbus, GA. He shared that all the students, staff owe this man Monk a great deal of gratitude. He concluded by saying “God bless you; we owe you love.”
Then came Mr. Eric Allen, Spencer’s coach in basketball. He shared a story that when Monk saw the basketball team with different shoes, he knew they needed help. Monk asked how much the coach needed for matching shoes for the team. Coach Allen told Monk $6,000.00 and Monk brought him $8,500.00. Coach said sincerely about Monk, “he is not judgmental.”
Mr. Kenny Doleman, a member of the W. H. Spencer High School staff, said when the cross-country team, the golf team needed funds, Monk was there. If it meant grilling in the rain, Monk was there. Mr. Doleman shared two Bible scriptures to describe Monk – Proverbs 11:25 and Acts 20:35.

Remarks were next on the program from Dr. Keisha Cook, assistant principal, W.H. Spencer High School. She learned that Monk came back to Columbus to give back. She shared that the school received Legislative Delegation Resolutions honoring Monk. Then Ms. Rosa Patterson, who opened the ceremony, added some facts as she brought Monk to the podium – from his being a 1970 Spencer graduate to a 38-year career with Sunbeam to the generosity of Monk and his wife to his membership in the NFL Players’ Association.
Reflections were tremendous as James “Monk” Johnson came to the podium where   the guests gave him a well-deserved standing ovation. Monk started by sharing that he now works for a cemetery and noticed people receive their flowers after death. He was happy to know that Dr. Freeman didn’t wait until he (Monk) passed away. He shared that he helped with the Joe Gilliam Foundation in Nashville and raised thousands of dollars. Then, he said and thought, “What have I done for Spencer High School.” This is when his plan to help Spencer High School blossomed. He knew he could help and he had so many friends that were with him 100%. In his heart-felt remarks, Monk said a few meaningful words of thanks including all those who came in support from near and far, GreenWave Nation and his former teammates from Spencer and Nashville, Tennessee because he ended his reflections with “It’s hot our here!”
The school song was led by Mrs. Ronita Baptiste, 1975 SHS Alum. The closing Prayer and Grace were said by Rev. Adrian Chester, pastor, Greater Beallwood Baptist Church, Columbus, GA.
Then the Sports Complex Sign Unveiling took place with the support of Spencer High School student athletes. This began the Sports Complex Celebration.
Tables were set up under two tents awaiting all in attendance.  All the guests enjoyed a delicious spaghetti dinner with tossed salad, a dinner roll, a slice of pound cake and a beverage (ice cold water or a selection of soft drinks).
As the program shared in print, there was food, fun and tours of the school and the sports complex. The James “Monk” Johnson GreenWave Sports Complex includes baseball and softball fields, a football field and track.  Most of all, everyone congratulated Monk as he rode on a go-cart with the lovely 108-year-old lady, Miss “Bay” King who give him the nickname, Monk.  Following the celebration, a reception was held at the Civil War Naval Museum.
Do you know Monk? You should know him now – he truly is one of a kind!

Do You Know Monk?

A Leader in the Community!